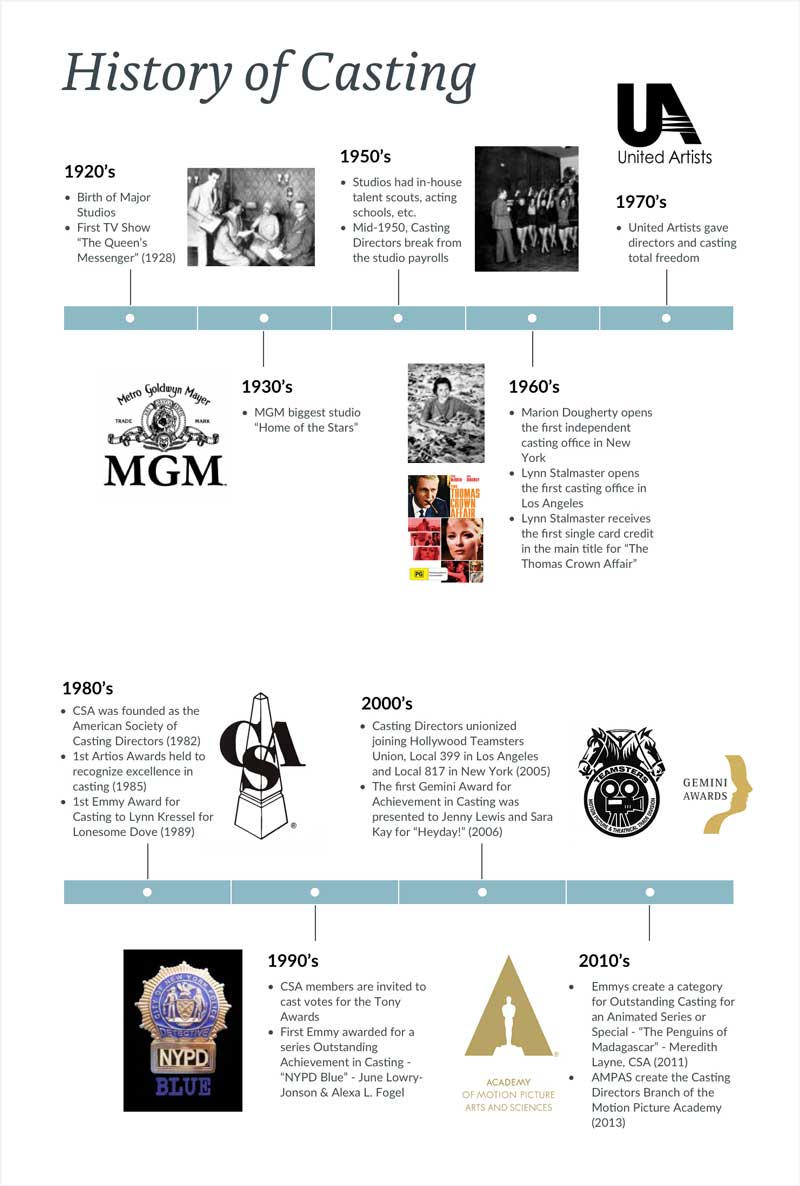 The Casting Society of America (CSA) was created in February of 1982 with the intent of establishing a recognized standard of professionalism in the casting field and providing its members with a support organization to further their goals and protect their common interests.The founding members of the organization (which at the time was called the American Society of Casting Directors) were Mike Fenton, Al Onorato and Joe Reich. By 1983, membership had grown to 39 and CSA began publishing a monthly newsletter for its members, reporting on casting-related news of interest.

CSA currently boasts close to 1000 members. CSA Casting Directors and Associates work around the world, with members based in the United States, Canada, Europe, Australia and Africa.Today CSA acts as a global resource for producers, directors and creative teams seeking casting professionals, promotes the image of casting directors and associates worldwide, engages in a number of charitable activities, and supports its members by sharing important and helpful professional information of common interest.

2014 The Academy of Motion Picture Arts and Sciences invites a record 22 Casting Directors to join as members of this exclusive organization. Current membership is at 90+.

2012 HBO premieres the documentary film 'Casting By', which shines a light on Casting by focusing on legendary Casting Director Marion Dougherty.

2011 CSA membership includes over 600 members, with Casting Directors and Associates across five continents.

2008 The first Casting Associates are approved for Associate-level membership of the CSA.

1989 The creative contributions of Casting Directors are recognized by the Academy of Television Arts and Sciences with the first-ever Emmy Award for Casting.

1985 Jennifer Shull becomes the first Casting Director designated by AMPAS (the Academy of Motion Picture Arts and Sciences) as a 'member-at-large'. The number of Casting Directors admitted as AMPAS members slowly increases, to its current number of 39.

1982 CSA was founded (as the American Society of Casting Directors).